The Morning of Mourning: On Orlando’s attack and being Muslim 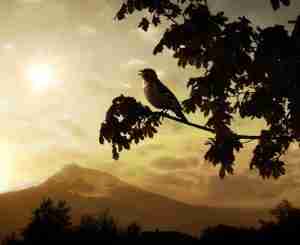 The Sunday morning of the mass shooting in Orlando, I woke up in my apartment in Berkeley, California, and began my ritual prayers in ancient Arabic. I hadn’t yet read the news. I heard the melodies of the birds outside my window. Warm air breathed in through my bedroom window. The early sun beamed into my bedroom. These sounds and sunlight connected me back to the Holy Land. For a moment, I no longer felt far away in exile. There was one exception: I would have known the names of each type of bird if I were at home in Palestine.

I was running late. Berkeley’s atmosphere and its fleeting similarity to my homeland had stolen my consciousness. I dressed and hit the road to attend a workshop. I was heading to a program entitled, “How to Leverage Power for Social Change.” All our troubles come from people in power who choose violent strategies to meet their beautiful needs. I want different choices for this world. I was look forward to meeting other leaders in social change who want the same.

Driving through Berkeley, I found myself mesmerized by the greenness of the front yards. The trees mirrored my family’s homestead back home. I rolled down my window to recover more familiar sensations, inhaling the fragrance of roses.  Early in the morning in Northern California, the flowers emit a strong scent and it’s easy to immerse myself in optimism.

I arrived to the workshop twenty minutes late. The group, sitting in a circle, was listening to each other share.

I’m late, how awkward – this is what I told myself.

I noticed sadness drifting across the faces of every participant. I focused to bring my mind into the present and get involved in the group.

She said, “As a lesbian, I now feel targeted, along with the whole LGBTQ community.”

Then, she said the words mass shooting.

The comfort and joy in me began crumbling – the sunlight in my window, the bird’s song, all dissolving into discomfort and sadness.

I don’t like those mornings when they pretend that they’re friendly and optimistic, and then the terror comes out. They remind me of my work back home as a journalist, driving to the radio station and listening to the Lebanese singer Fairuze. In Palestine, every single morning, nearly all the radio stations broadcast her song to open our day. Over the airwaves, she sings about losing her soulmate, Shadie, in the wood. She tells listeners how she loves and longs for him, hoping to find him by sharing her song.

On those mornings in Palestine, I would arrive at Radio Alam, the station where I worked. Every day I would cover news about those killed in the conflict between Israeli soldiers and my people. The joyful morning would shift into mourning.

I’ve always wondered why Fairuze’s song and my drive were predestined at the same time every day.

This morning of the Orlando shooting, I had driven from my place to the workshop, playing Fairuze. She was still trying to find Shadie. I was sure I had won this day. Look at this, I had thought, I’m enjoying my drive and listening to Fairuze’s journey.

Somehow, once again, Fairuzee lost her love, Shadie, again and I lost the peace I sought. This time, we didn’t even need to be in Hebron. The old sadness found a new home in Berkeley.

“I want to mourn all those people who were killed,” the woman in the workshop was now saying, “and I want to be careful about Islamophobia in my community.”

I was still processing what had happened, gathering details as she spoke. Islamophobia? As a Muslim, I feared that whoever committed this massacre used my religion as justification against all these innocent people. I know the consequences; the mainstream media doesn’t need a reason to demonize Islam.

In these moments, I fear for my safety as well as for the Muslim community in United States. I feel an urgent need for protection. Each time Trump announces his rough sentences against us, between accusing us of terrorism and threatening to ban us from entering the US, the Muslim community struggles to explain ourselves inside the American community. We get labeled on behalf of brutality that isn’t even part of our identity or belief system. Now we must come out as totally against these labels that were invented in the first place.

Every day, here in exile, I first translate my thoughts into English in order to speak. Then, I translate my beliefs from American media’s interpretation into the way that I understand them, translating myself as a “good Muslim” for western culture.

Today, I chose to question this defense, this rush to explain myself and my tradition. I stayed silent. I looked down at my phone and open the Aljazeera app to read the news. The first headline announced the mass shooting. In the same headline, the article mentioned that the attacker’s parents originally came to the U.S. from Afghanistan.

As the participants clarified and shared their feelings, the room seemed to me full of questions. I was the only Muslim there. I didn’t utter a word about the shooting.

In that moment, I wanted to break the rules. I wanted to have nothing to say about Islam and being Muslim for the same reason I often speak up: because what happened has nothing to do with me. I finally felt no urgency to defend myself from illusionary accusations propagated by the media. I was mourning people who had just lost their lives.

My heart hurt for all those families grieving their beloveds in the attack. I also held a heart heavy with fear about what would be coming. I worried for the hatred on the horizon, escalating and headed towards the Muslim community. Trump would invest in the pain of the victims by dehumanizing the Muslim community. Meanwhile, he would assure Americans once again of his truthfulness. How much would his investment in pain will cost us?

In the workshop, a participant was talking about trying to protect the Muslim community.

“It’s been challenging for me,” she shared, “living with my husband who is considering Islam as a threat.”

Her husband spent hours reading about Islam every day . He considered my tradition a threat to the whole world. Before she came to the workshop this morning, her had told her that Shareat Allah – Muslim religious law- advocated punishing the LGBTQ community by putting them to death.

I listened to what she just said and I didn’t comment.

One of the facilitators mentioned that a Muslim was present at the workshop. Out of over twenty participants and two facilitators, I was the only Muslim. She turned to me, asking if I had anything alive in me to share. I saw that she wanted to hold me with care as the only Muslim in the workshop. Despite feeling her intention, and despite expecting moments like these, I still felt threatened.

“Well, I believe that what’s there about the gay community in the religious law of Islam,” I said to the group, “is the same in Judaism and Christianity. It’s the interpreted aspect of the religion and written neither in the Quran nor the Torah nor the New Testament.”

I think I was trying to protect myself when I responded. All I wanted was to be one among the group, as anyone there, holding this mourning with tenderness. I too was grieving the victims. I didn’t want questions addressed only to me – simply because I didn’t have the answers. I wanted to be in an empathic atmosphere that could hold me.

Hearing of the attack affected me in two different ways. First, I experienced the loss as a human being mourning these lives. I considered myself as one of the whole.  Second, I felt threatened. As a member of the Muslim community living in the States, I am one of many being targeted by some politicians and by many in conservative media.

I have always believed that if you want to heal your body, you need to feel the pain in your body consciously and treat it with compassion. Only then can you begin to recover. You won’t heal a wounded organ by cutting it off from your body. This just makes the pain worse.

Love is the only tool that the human race has and our weapons can’t ever defeat it out of existence. I long for American society to welcome Muslims and consider us as part of the wholeness of American community. I want us to feel each other’s pain and face the difficult times together. We can do this with love and trust, rather than cut each other off and separate ourselves from the pain of the whole body, this one nation.

Viewing me as a journalist, a Muslim, and a Middle Eastern immigrant, people have been asking me for weeks now to speak out and emphasize my compassion towards the Orlando tragedy. Yet, I’ve wanted what any feeling person wants right now: to mourn in community. I want to feel our connectedness to each other. I want to hold each other with care and not single any of us out – queer, Muslim, or any combination of identities. I want us all to be held in our one, united humanity.