I can inform the other person that their choice of words is reducing my sense of connection with them and that this is likely to result in their needs going unmet, as well as mine. However, this seems very similar to telling them that what they are saying is “wrong.”

I assume both parties understand the implicit expectations of communication in most life situations. In this context I feel there are choices of words that are “wrong” or “right.”

That’s part of the goal, for me. Another part might be to make a request that they use different words, or not use certain words, or give me certain information that they often miss out, or a wide variety of other requests (please see an example at the end of this article).

In reply to: “I can inform the other person that their choice of words is reducing my sense of connection with them and that this is likely to result in their needs going unmet, as well as mine. However, this seems very similar to telling them that what they are saying is ‘wrong.’”

We live in a society where the ideas of “right” and “wrong” are very commonly used. For me the most important thing is whether *I* am thinking in terms of “right/wrong” when I speak to the other person.

Integrating NVC, for me, means that I no longer think it “wrong” (i.e., “morally wrong”) that someone is using words I’m not enjoying. I work on the belief that they are simply trying to meet their needs to the best of their capacity in that moment, given all the specifics of that moment.

Flip the situation around, and now it’s me telling them that what they’re saying is impacting me in a way that is reducing my sense of connection to them. I’m very aware that the other person will often interpret that as me saying that they’re doing something “wrong.”

It can sometimes take a while to convince someone that I’m not judging them as wrong, especially if I’ve judged them that way in the past!

And, it’s still possible that a judgment might still come to mind. The judgment-creation part of my brain still works and serves up judgments without my asking for them . But now I’m much more likely to use that judgment as a stepping stone to getting clear on my observations, feelings, needs and requests, rather than believing the judgment is true and getting into an argument with the other person about the truth of my judgment.

In reply to: “I assume both parties understand the implicit expectations of communication in most life situations. In this context I feel there are choices of words that are ‘wrong’ or ‘right.’”

Some people use the words “wrong” and “right” as a shorthand.

If you believe you have shared expectations, or even agreements, about how to communicate, then saying:

If using the words “wrong” and “right” works for you and another person, as a form of shorthand, then you could say that you’ve landed on a usage of those words that meets needs for both of you.

This would be like playing a boardgame with someone and saying, “That move was wrong” meaning “That move was outside of the rules as laid out in the instructions for this game.” This use of “wrong” might be a very efficient way to convey the message you’re trying to convey and support you both in enjoying the game.

Example of dialogue:
An example I like uses the analogy of driving. Imagine you have a request for your partner about their driving but that this request is no longer coming from an idea that there’s something wrong with their driving.

You (passenger): “Sometimes the combination of the speed you’re driving and how close we are to the car in front, brings up a lot of fear in me. I’ve asked in the moment if you could back off a little but got a strong impression you did not like me asking for that…”

Your partner (driver): “Right, I don’t like it because you’re saying there’s something wrong with how I drive! But I know I’m a good driver and everyone else agrees, so chill out!”

You (passenger): “That’s certainly the way I would have thought about it in the past. But now I realize that my fear is not telling me there’s something wrong with your driving. My fear is telling me that I don’t have a sense of safety when driving at that speed and that distance from the car in front. Another person would have no fear and a total sense of safety, but I don’t. Others might find they can chill out, even if they feel fear at first, but I’ve not yet been able to do that. My request that we back off a little from the car in front is me letting you know that there’s something you can do that would give me a greater sense of safety. My sense is that backing off would be a gift to me, given how my nervous system reacts to that situation. Does hearing this change how you see the situation at all?”

Where the conversation goes from here can vary, of course. If your partner is totally steeped in viewing everything through the lens of “wrong” and “right” then they might not be willing to give the gift of backing off, because doing so would seem to them like an admission of wrongness, or an admission of “guilt.” This is an example, for me, of how “right/wrong thinking” is so often the basis upon which conflicts are built.

Replace “driving” with “speaking” and the situation is similar. Your partner might speak in ways that reliably trigger pain or fear or anger or a sense of hopelessness in you, even though a different person would not feel any of those feelings or have the same unmet needs as you. You could make requests to your partner about speaking differently, without making any use of the idea that there’s something “wrong” with how they’re speaking.

I’ve found that my own relationship to the ideas of “wrong” and “right” is an essential ingredient in integrating and living NVC. The more I’m able to translate these judgments into what they really mean for me, i.e., my observations, feelings, needs and requests, the more easy it is for me to communicate with others, and to live a life with more met needs for me, including, of course, my need to contribute to others. 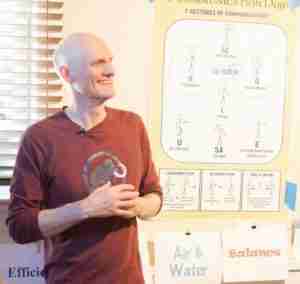 Newt Bailey is the founder of the Communication Dojo workshops. His passion is sharing nonviolent communication, through workshops, videos, and other materials, in a way that is quick to integrate and put to use.

In his private practice, Newt brings his services as a trainer, coach, and mediator in corporate settings, with a focus on executive and “office hours” coaching. Newt also works privately with individuals and couples as a coach and mediator.