Practicing Nonviolence in Our Current Times

“Nonviolence is not a garment to be put on and off at will, its seat is in the heart and it must be an inseparable part of our very being.”
—Mahatma Gandhi 1 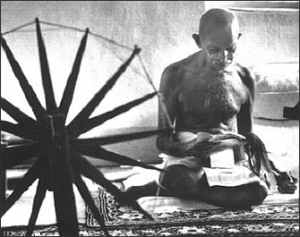 The principles of nonviolence that Mahatma Gandhi and Martin Luther King Jr. practiced, modeled, and lived out have impacted billions of people and led to many social change movements marked in history.

Nonviolence is rooted in the principle of ahimsa, which literally means to be without harm to oneself, others, and all living things. It is the place where compassion can flow in each of us and where there is no room in the heart for violence. “With truth combined with ahimsa,” Gandhi writes, “You can bring the world to your feet.” 2

Gandhi, Martin Luther King Jr., and many others have seen the power of ahimsa and nonviolence firsthand and have in many ways brought nations to their feet. Walter Wink cites in his book The Powers that Be, “In 1989 alone, thirteen nations comprising 1.7 billion people—over thirty-two percent of humanity—experienced nonviolent revolutions. They succeeded beyond anyone’s wildest expectations in every case but China. And they were completely peaceful (on the part of the protesters) in every case but Romania and parts of the southern U.S.S.R. If we add all the countries touched by major nonviolent actions in this century, the figure reaches almost 3 billion—a staggering sixty four percent of humanity!” 3

Nonviolence has been around for a long time and it has been used effectively for centuries. Yet, it was not “developed into a movement complete with strategies and tactics until Gandhi and King.” 4

Wink adds, “No one with any knowledge of history can ever again say that nonviolence “doesn’t work.” 5

A Way of Life

For Gandhi and King, nonviolence was not just a strategy and/or tactic for a peaceful protest or movement—it was a way of life. Nonviolence was meant to be lived out daily.

To Gandhi, ahimsa or nonviolence was the duty of all, not just a select few. It encompassed being kind to all and not producing harm in any way to another. “In addition, he made it a positive and dynamic method of political action to challenge evils that had been allowed to fester—from the domination by the British to the acceptance within Hinduism of untouchability,” writes Terrence J. Rynne. “It was a method, in fact, that could be used in every arena of life.” 6

For Gandhi, humility was necessary to practice nonviolence. He believed nonviolence was only possible if the individual did not harbor any evil thought in his heart. He says, “If one has pride and egoism, he is not nonviolent. Nonviolence is impossible without humility.” 7

Here we see that this is a matter of the heart. To practice nonviolence in our lives takes effort, practice, and commitment. It involves becoming aware of any thought that may hinder us from loving others, doing no harm, and seeing the humanity in another so that we can choose to open our heart to others. Gandhi believed that ahimsa and satyagraha, which means holding on to the truth, was a positive force—a love in action, not just a feeling. This “soul force” (as King would refer to it later) was a force that could transform a situation and a person. “For Gandhi, ahimsa was power but power in a new key, power that changed the situation, the opponent, and the practitioner all at once.” 8 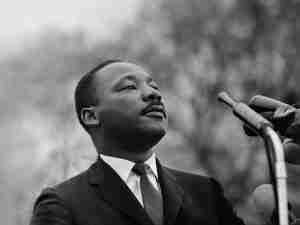 King writes in his book Strength to Love, “To our most bitter opponents we say: ‘We shall match your capacity to inflict suffering by our capacity to endure suffering. We shall meet your physical force with soul force. Do to us what you will, and we shall continue to love you… But be ye assured that we will wear you down by our capacity to suffer. One day we shall win freedom, but not only for ourselves. We shall so appeal to your heart and conscience that we shall win you in the process, and our victory will be a double victory.’” 9

This “soul force” has the ability to transform the situation, the person protesting and the opponent. In order to love the way King describes, we must be committed to doing no harm, to loving others and to being able to empathize with the opponent or person that we are trying to persuade.

We cannot allow moral judgments (such as the thought that someone is evil), or thoughts and language that put others down, to remain in our heart. These thoughts lead to war and wanting to use power over others and violence. Instead, it is important to see the humanity in others by imagining what needs they are trying to meet with their actions and/or position.

Whenever advocating for justice in any environment, we can do this. Whether it is in the workplace, school, or home, and with individuals, organizations, systems, government, or any other group, we can apply nonviolence.

Nonviolence or ahimsa is something that is available for all to access. We can choose to integrate it into our daily lives. May we embark on learning about nonviolence and practicing ahimsa in our lives and when we encounter conflict.

I encourage you to consider participating in the Season for Nonviolence (SNV), a National 64-day campaign committed to demonstrating that nonviolence works. The campaign, which begins January 30th and ends on April 4th was inspired by the 50th and 30th memorial anniversaries of Mahatma Gandhi and Dr. Martin Luther King Jr.

SNV was established by Arun Gandhi, Mohandas Gandhi’s grandson. The international event honors the visions of individuals like King and Gandhi and many others who have been pioneers in nonviolence.

Eddie Zacapa is the founder of Life Enriching Communication, a certified trainer with The Center for Nonviolent Communication (CNVC) and the author of Principle and Practices Nonviolence: 30 Meditations for Practicing Compassion. Eddie has worked in the domestic violence field for 18 years dedicating his life to ending the cycle of violence. You can visit his website at www.peaceloveandnonviolence.com and his blog at www.harmonyoftheheart.com.