BayNVC has two new interns! Our interns, Azzam Talhami from Palestine, and Sadhana Vornberger from Germany, are both passionate and experienced social justice activists. We were excited about the work they are already doing in the world.  We asked them to interview each other so you can learn a bit about who they are. Read on to learn more about these dedicated young peace-makers. 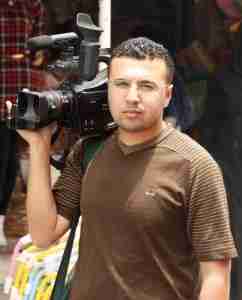 Azzam Talhami, a journalist seeking a new way of reporting the news

We are Azzam Talhami and Sadhana Vornberger, BayNVC’s first two interns. We are very excited to be here and eager to embark on this shared journey! We are going to work together on various projects, get more training and practice to deepen our NVC skills, share NVC with others, and we’d love to create community around our activities – come join us!

In order for you to get to know us a little bit, we are going to introduce Azzam to you in today’s post, and Sadhi in the following one.

Sadhi: So, why did you come to work as an intern at BayNVC?

Azzam: My biggest inspiration is to share my knowledge about the conflict between Palestinians and Israelis. I want to be known, seen and heard about the continuing issues in Palestine/Israel until this present day. I want our reality to be acknowledged and shared.  In addition, I believe that the media doesn’t cover the conflict in an observational way which causes lack of understanding about the conflict.

Also, I am searching for various ways to bridge relations between Palestinians and Israelis in order to bring an end to the conflict between them and to live together in peace. Moreover, I would like to improve my skills in NVC, so that I can take what I learn here back home to my community.

Sadhi: What are you hoping NVC would do in your country/community?

Azzam: There is so much hatred and violence there between people, they can’t stand each other at all. I find NVC to be a language that could be spoken between them, because I believe that even in dark moments, human beings can have compassion. This is what NVC is about. By being a peace activist who’s been working several years to bring people together, I’ve come to an awareness that the only thing that would dissolve the enemy images that Palestinian and Israeli people hold of each other is to bring them together, introduce them to each other, support them to be in connection about their pain, happiness, sadness, hopes and wishes, dreams, and difficulties in their daily lives – which are all affected by the ever present reality of the conflict.

Sadhi: What is your personal story with NVC, how did you get to know it?

Azzam: My passion about NVC and my commitment to this kind of language and the attitude that it is based on comes from my work as a journalist in the West Bank. I’ve witnessed terrible stories; about losing kids and parents and properties, I held my camera shooting photos in funerals and clashes, and my heart was bleeding each moment seeing this loss of the values and human beings’ lives. Many people have asked me whether NVC could solve the conflict in Palestine and Israel. My answer is that NVC wouldn’t solve the conflict, but that it’s a very powerful tool to reduce the violence and the hatred among both communities. As a peace activist, I believe that it is not possible to find a solution as long as there is violence and hatred.

The day I first heard of NVC, an Israeli friend and I were organizing a get-together between Palestinians and Israelis on the occasion of Passover Seder, a Jewish holyday. I invited some of my Palestinian friends to come to the gathering at Ecome Center, a place near the Dead Sea where Palestinians, Israelis and International people can meet and experience daily life together. Roberta Wall, an NVC trainer from the States attended this gathering and invited me to attend the soon-to-be-held International Intensive Training (IIT) in Ecome. At the end of the day that we were organizing I had partly succeeded in convincing some of my friends of how necessary and important it is to break the barriers between the Palestinian and Israeli communities. And I had gotten to know about NVC, which seemed to put a name on what I was doing, on the attitude and change of framework and consciousness that I was holding myself to and inviting others to join. NVC provided the words and concepts to describe what I had been feeling and doing, and why I was doing the work that I did, and why I was doing it the way I did. I was born with this attitude. And when I encountered NVC for the first time, I had the experience of being seen and heard for my story. I was touched by seeing and listening to people empathizing with others. I was involved in peace making before getting to know NVC, I had for example already been inviting Israelis to my home, which is not at all common amongst my community. NVC explains the underlying essence of my peace activism practice.

Sadhi: How would you describe this essence?

Azzam: In my understanding, NVC assumes that we are all innocent. At some point, we were all innocent. And somehow, life became complicated and some of us lost this innocence. NVC is giving this innocence back to us. There is a practice of Sufism called “hoasnnieah”, which means “the pure intention”. I’ve been practicing Sufism since November 2004. And its main assumption is to assume the pure intention of the other. So when someone is saying something, even if it is hurting me, I will assume that their intention was pure. The outcome might be harmful, but there is a pure intention behind what they are saying. NVC adds to this the notion of need, with which I can explain how the intention of the other person can be pure, that this person is trying to meet some need. NVC was landing with me because of this connection.

Sadhi: You’ve already spoken about some of the ways how this attitude translates into your actions. Knowing that you as a Palestinian learned Hebrew, the language of the Israelis, I am curious to hear more about it.

Azzam: Being able to speak the Hebrew language fluently opened up doors for me. It gave me the opportunity to create strong relationships with Israeli friends, to learn that they have the same opinions than I, to get to know them in their humanity. So long as we don’t know each other, so long this conflict will persist. Speaking and understanding Hebrew made it possible for me to realize that there is compassion for Palestinians from Israeli peace activists. If I didn’t speak Hebrew, it wouldn’t have been possible for me to know that part of the Israeli community is empathizing with the Palestinian community! So this meant companionship to me, a companionship with people from “the other side”. This was a source of motivation and passion. I don’t want to think of us as being two “sides.” I am experiencing the companionship and connection and shared goal of peace making across the separation. Speaking Hebrew also opened my eyes to other aspects of the Israeli community, different from, for example, my daily life experience with Israeli soldiers.

Sadhi: Thanks so much for sharing, I’m touched and also feel companionship with you while listening to what you’re saying. And more excitement about working together! So, what are your ideas about what you’ll be doing here?

Azzam: As you know, we are participating in the Leadership Program of BayNVC, which is a support for my learning, provides community, and the training in NVC and leadership skills that I was looking for.   As a journalist, I am particularly interested in how to apply NVC in the field of media, especially in communities who live in conflict zones. I want to research different strategies to reduce the incitement and the hatred through the media, and reach to the point of having observation-based news instead of evaluating news that perpetuate judgment of others.

One of the projects that I previously took part in that was following this objective is Voice by Voice. In 2013, I explored a new model of interviewing based on NVC principles with a group of friends who had attended the IIT in Jordan Valley with me. We interviewed Palestinians and Israelis that were affected by the Israeli-Palestinian conflict, and they shared their stories with us. The aim was to enable more understanding of each other’s’ pain in a very peaceful way; by telling and listening. We created a space for them to express their feelings and needs freely, so that they could have the experience of being seen and heard, in order to transform the way Palestinians and Israelis were feeling and relating to each other. We encouraged the people we interviewed to share their observations without evaluations, their feelings and needs, and whatever requests they might have.

We close with one of Azzam’s poems.

As on every night

On this inspirational night thoughts crowd in upon me
Words agitate and letters compel
Articulation finds all meanings spent before it
Continually outdoing the meanings that came before it
As rain pours from a maddening winter’s clouds
Bearing meaning without forbearance for clamoring memories
An adventurous soul delights to travel toward the unknown
To say that the rest are fed up with silence, not to bear mutes
So I will create upon creation
Situated upon pages

I will find my path not to be hindered

Here are some videos from Voice by Voice, a video project Azzam and his friends developed.

We are fundraising to support our interns by providing room and board while they are volunteering their time at BayNVC this year. There are two ways you can support them: